Ever wonder just how far you can push your body?  Really test its limits to see what it can accomplish?  I'm constantly trying to take that extra step and see what I'm truly capable of.  Running the Flying Pig races in Cincinnati were a true test of my mental, physical and emotional fortitude.  What's the 3 Way Challenge you may ask?  Well the weekend has a variety of different race options, but if you're lucky (or crazy enough) to do the 10k, 5k and half marathon you get some extra swag as a challenge member.  I should note there is also a 4 Way option which would include the 10k, 5k and full marathon.  The race challenges get their names from a Cincinnati icon, Skyline Chili (more on that later).
I'm a sucker for a good challenge, especially one with bonus swag so of course I signed up.  I tried to recruit friends to embark on the journey with me, but alas I could only find someone to do the 10k.  Saturday morning Victoria and I got to the race early to pick up our bibs and get warmed up for the 10k.  As a challenge member, my bib had a fancy gold stripe on it to let everyone else know how crazy I am and as both the 10k and 5k where the same morning I had to wear both bibs simultaneously.  I started the race feeling great and excited about the weekend.  I lost some steam when we hit the bridge going into Kentucky but picked it back up as I hit my stride and found my happy pace.  Then, hills.  And more hills.  Someone told me that the 5k/10k courses wouldn't have many hills so I wouldn't have to worry about that until the half on Sunday but they tricked me.  As I hit some of the hills I realized I needed to really slow it down and conserve energy for the other races I still had ahead of me.  I finished still feeling great, grabbed some water and refueled a bit before the 5k.

As I walked towards the next starting line a fellow challenge member struck up a conversation about my Midwest Vikings shirt.  Apparently my new nickname Mistress Mayhem has attracted quite a bit of attention and speculation.  Turns out he was registered for the 4 Way challenge so of course I had to give him my most sincere "vaya con dios my friend" (translation: go with God).  Lining up for the 5k I knew it would be a breeze and I'd be well on my way to some real food soon so my spirits were still high.  At the finish line I was able to pick up my medals for both races and wandered around to find my ride.

Skyline Chili.  Let's just say I had no idea just how intense that would be.  I'm from Detroit so naturally I'm skeptic of any place outside of Michigan claiming to have something called a Coney Dog.  I ordered the Chili 4 way and a coney.  I was making a bit of a mess so the nice lady behind the counter brought me a bib to get the full experience.  The food was good, but it still doesn't compare to the greatness that is a true Detroit Coney Dog.  Post carbo loading I needed a nap then we stopped for some Graeter's Ice Cream on the way to the baseball game as we were told this was another must-try.  The black raspberry chocolate chip was pretty phenomenal so it didn't let us down in the slightest.


Because when in a new city...must see baseball.  I'm trying to visit all 30 major league ballparks before I'm 30 so a quick stop at the Great American Ball Park was in order.  By now I'm starting to really feel some discomfort in my left foot but figured some beer during the game would help alleviate that.  After it was over I was ready to crash and get some serious rest before the last leg of the challenge.

Sunday morning I could barely step out of bed the pain was pretty intense.  I did my best to roll it out with some massage balls I brought along and said a prayer.  Got dropped off at the starting line and tried to calm my nerves and really prepare myself for what I knew I had to do.  I blocked out the pain and reassured myself that I could do this.  A fellow challenger was lined up in my corral and congratulated me on making it this far.  We shared some stories then put on our game faces as the corral began to move towards the starting line.  I have to say that among all of the races I have run, this one by far has some of the BEST sideline cheer stations.  Every time I needed that little nudge or push there would be someone there ready to clap, cheer or tell me to stay strong.  That goes a long way when you're feeling rough.  Mile after mile I felt the pain creeping back stronger and stronger.  The middle portion of the race is mostly uphill and a blur to me as I tried to block everything out and just focus on getting to the finish line.  I'm not sure which mile starts the downhill portion of the race but it was a thing of pure beauty when I hit that stretch.  I distinctly remember stopping at an aid station only to find they were handing out swedish fish and not water, I took one anyway and kept on trucking.

Somewhere in the last mile I could barely keep my mind going.  It was a struggle to just keep moving forward.  Everything inside me was screaming to stop and curl into a little ball and cry.  This was the moment I knew that it wasn't my feet I was running with, but my heart.  It took over completely.  I was able to silence my thoughts and just push through on pure adrenaline.  From time to time I'd have to take some breaks to limp along until I could regain my composure and get back on track.  Right before hitting the last stretch of course before the finish line I was wiping sweat and tears from my face as fans cheered on and encouraged us all to keep going.  Then a small miracle happened when someone handed me some beer and said "here take this, it'll help!".  I'm not saying that little cup of hoppy goodness is what pushed me over the edge, but something about that gesture from a complete stranger just gave me what I needed to overcome everything holding me back from finishing strong.  As I reached the finish line I pretty much broke down into tears.  It's an incredible feeling to finish something like that.  I've never felt stronger or more resilient than I did in that very moment.  It was as if all the pain in my foot just melted away and was replaced with pure joy. 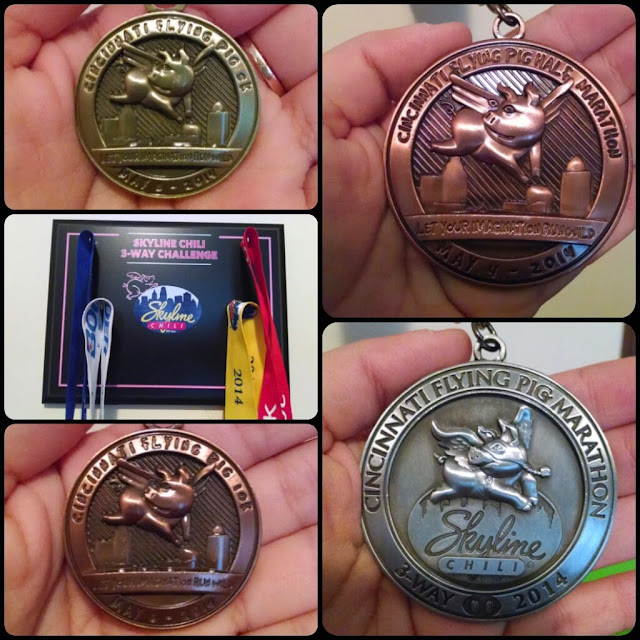