I recently wrote a post for The Keg Tap and wanted to share it here as well. If you get a chance, head on over to their site and check it out!

I am a unicorn. I didn’t realize it until last night, but apparently I’m much like the mythical creature — legendary, elusive, and often surrounded by bright colors and glitter. OK that’s not really what I’m talking about, but you know what I mean, a rare individual. I was sitting in the Goose Island Tap Room and I looked for other Latinas. At first glance there didn’t appear to be very many of us. Then I tried to count how many women present, the numbers are dwindling. Yup. Looks like I’m the only Latina here. That’s cool, it means it’ll be easier to make friends. I smiled, mentioned Star Wars, and next thing you know I had 3 glasses of beer in front of me (thanks guys!). We talked single origin coffee beans, stouts, sours, and a plethora of other beer nerdage. So how did I get here? Or rather, what lead me down this path to craft beer snobbery? I suppose a part of that is that I come from a line of unicorns, descended from generations of other women who also drink beer. My mom — a Bohemia is her brew of choice. My grandma — while she won’t necessarily admit it, she has been known to take a few swigs from time to time when she thinks no one is paying attention. I drank my first beer with my mom, there wasn’t anything that seemed strange about it. But then again, I was raised in an environment that encouraged me to not only be different, but to embrace my uniqueness.
The more beer I drank, the more aware I became of my “otherness”. Here in Chicago the good folks over at Lakeshore Beverage started a beer club. I invited another blogger to join me for the first meeting and we ended up being the only women of color present. It’s easy to notice when you’re the “other”. There we were drinking dark beer and all I could think about was how we were the only “dark” people there. I wonder what it is that’s caused this rift. Surely there must be plenty of Latinas who drink beer, right?

A few weeks later I ended up at a brewery for a running event and there I was again, one of the few women of color drinking beer. Another woman at my table asked what I was drinking (I was the only one with a dark beer) and I proudly exclaimed that it was an oatmeal stout then offered to let her try some. We had an entire conversation about beer after which she said “wow, so you really know your stuff huh?”. I never feel like an expert, mostly because when I go to beer focused events I feel so much the outsider. I’m often asked if I’m there with my “boyfriend”. Nope, I just like good beer sir, but thanks for bringing attention to the fact that I’m single and here alone.

This has become pretty common for me. There’s always an initial “how did you get dragged into this event?” or some other comment implying that I must not like beer or that I don’t want to be there. Yes, that’s right, I’m a woman, I’m Latina, and yes I’m here for that newly released saison – can we get on with it now? Even at all female events I’m immediately reminded that I’m not the same when I’m suddenly the only one with a beer pint as everyone else delicately sips their elaborately garnished cocktail.
And while I may be different, I’m certainly not a victim. I’m not mistreated, I think I just confuse people. I get it, you’re not sure what to do because I don’t fit into one of your neatly crafted boxes – you’ve never encountered a unicorn before. Its easier for you to assume I don’t belong. But maybe I do, after all, every great story needs a legendary character or two right?  Once you realize I’m here just like you, to enjoy a delicious brew, I hope that you’ll accept me with open arms and open bottles.
Posted by Unknown at 12:50 PM 3 comments:

In case you're wondering, yes, Lucha Libre is still a thing. I remember watching it as a kid with my grandpa and being entranced by the crazy masks and dramatic moves. We all knew it was fake but that was part of the appeal. Sitting with my grandpa and laughing at the luchadores are some of my favorite memories as a kid. When I saw Beer Fest Beat Down would have live Lucha Libre I knew I had to go. I mean really, how often do you get the chance to see that AND drink craft beer while you're at it? The beers were great, there were more samples than I could have tried over the span of a week. Taking a friend was key so we could sip from each others and try more stuff. I'll definitely be back again next year! 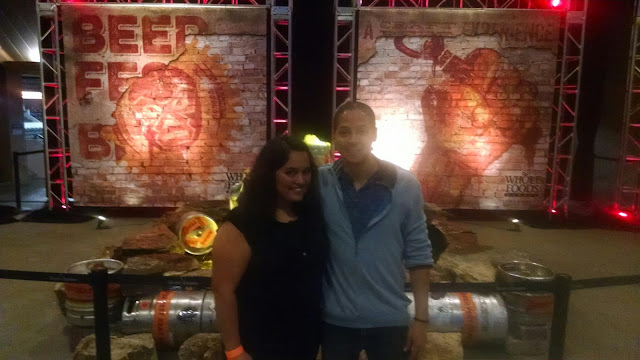 I love the zoo. I love beer. Brew Lights is basically the best thing for those like who are still a kid at heart and love checking out the animals and lights while sipping on some brews. The setup was great, there were several tents with the same beers so you weren't stuck waiting in line for very long at any location to get a sample. It was a bit chilly so warming up in the different animal houses was also a big plus. While it originally seemed like the samples wouldn't be enough to truly satiate our beer drinking needs, Adam and I quickly realized that we would have more beer than we knew what to do with. Eventually I had to tap out on drinking the full pours and only took a couple sips of each before dumping it. It was so sad to have to do that but my poor liver just couldn't handle all that. Note to self for next year, be prepared and have snacks.
Posted by Unknown at 11:59 AM No comments: