First things first, if you ever want to feel like Mr. T or Flava Flav as you cross the finish line, this race is DEFINITELY for you.  That being said, here's a little run down of how my Sunday went.  Be warned, it may be a bit long winded.  I got up early like any other race day but felt pretty sluggish.  Not sure if it was the open water swim I did the day before or perhaps spending too much time at the beach laying out afterwards but I certainly didn't feel like heading towards Grant Park yesterday.  I went through all the normal pre-race motions and made my way to the train.


A few stops after getting on, the gentleman across from me asked about my race bib.  He was wondering what the race was for and I simply said "it's the Chicago 10k".  Once I realized his question was really about the charity I had to do a quick google search before letting him know it benefited the Special Olympics (not to self, must pay more attention to race charities).  I apologized for not knowing already but explained that I run about 40 races a year and its hard to keep them all straight.  He looked puzzled that someone would actually want to run that many races and asked if it was a passion for running or the charities that made me want to run that much.  I realized I didn't really have a good answer to that question, I have a love/hate relationship with running as most of us do but I can't really pinpoint what keeps me coming back for more.  Each race is different, sometimes it's to help a friend, other times it's to prove I can do it and some I just simply like the course or medal.  After a long pause he said, "Now I don't want to put a negative spin on things, but do you think that runners are less likely to do races or want to do marathons because of those bombings?".  This seemed like such an odd question to me, I immediately blurted out "of course not!".  I then followed up by telling him that if anything it brought us all closer as a running community and made us stronger.  We aren't deterred, much the opposite, it made us want to run MORE.  Whenever we're faced with something difficult it drives us to push harder.  I explained that deep down all runners have an unconquerable soul, we refuse to let anything hold us back and continue to persevere no matter what.

After that little chat with a stranger I was feeling surprisingly energized.  I got off the train and was ready to take on the day.  I met up with my fellow Midwest Vikings for our pre-race photo op and then did some socializing with other friends.  We really are a big family.  People think that running is an individual sport, and I suppose in a way it kind of is but the camaraderie you build is what keeps me coming back.  I look forward to those hugs and well wishes before we head to our corrals.  I relish in the moments of meeting new friends and swapping stories of previous races.

The race was about to get started so we split up to find our respective starting groups.  Sam, Freddie and I hung back while most of the other runners headed to earlier corrals.  As soon as we were off I was feeling really great, took off out of the gates a bit faster than usual.  I was able to hold a strong and steady pace for most of the first mile and a half before things got ugly.  We hadn't reached a water station yet and I didn't see any in sight.  I started to panic a bit as I was really starting to get thirsty.  By the time we finally reached that first table the damage had been done.  I tried to refuel as much as I could but my body couldn't hydrate fast enough.  My mouth felt dry and I was starting hallucinate telling Sam that I thought my skin was melting off.  Each water station I poured some on my head, drank some water & gatorade then splashed more water on my face.  It helped to keep me cool but I was still struggling.

Thankfully I had plenty of friends coming back after the turnaround to cheer me on as I was still on the front half of the race.  After I reached the turnaround I made it my mission to cheer on everyone coming towards me.  Most of them were receptive of my cheers but one woman did not look very welcoming to my clapping.  Perhaps she was having a rough day too.  Each one who smiled back at me though helped to push me just a little bit farther.  As we approached the last mile I finally felt a tiny whisper of a second wind coming on.  I tried to ride it for as long as I could to get me to that finish line.  Somewhere in the last 1/4 a mile one girl kept trying to pass me.  Nothing bothers me more than someone who continuously tries to gain on me and then slows down...either pass me or stay behind.  I finally had enough and decided to kick in that final drive to get me to the finish line.  I forgot this part of the course takes a slight uphill to the finish but it didn't matter, I was on a mission (see picture).  I crossed the finish line and applauded myself for passing 20 people in that last stretch of the race, hey it's the little things right?

I got my medal and turned around to find Sam.  We gathered our post-race snacks and ventured off to find our other friends.  As we walked towards the train I scarfed down all the food I had picked up and downed all my water.  Sam offered to stop for breakfast but all I wanted was a shower and my bed.  I was hoping I had hydrated enough to off-set my earlier distress, but much to my dismay my body body was still pretty upset with me.  Despite all my efforts at appeasing it, I felt like garbage the rest of the day and had one of the most righteous headaches in recent history.  It wasn't my worst race ever but it certainly wasn't pretty. 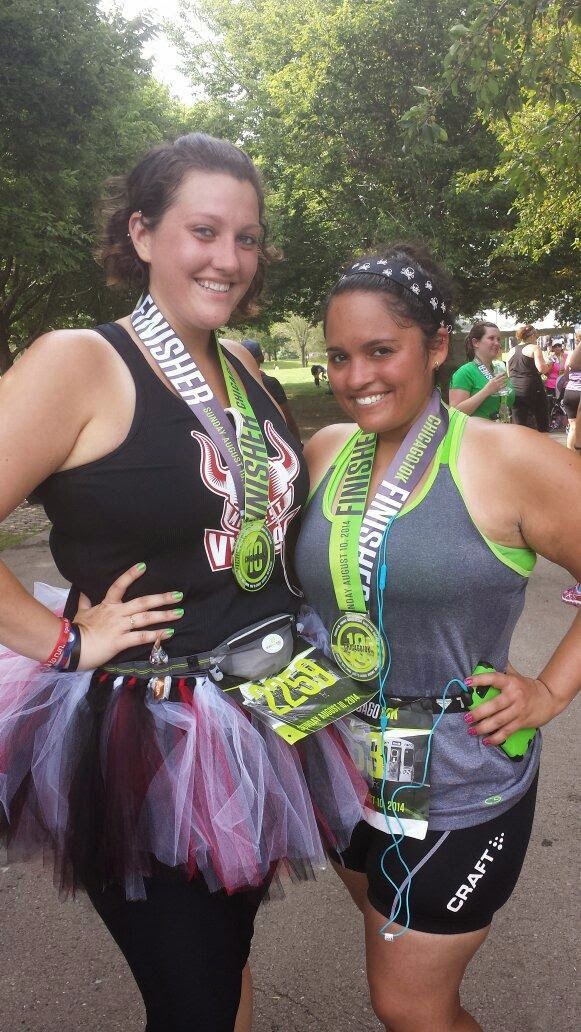 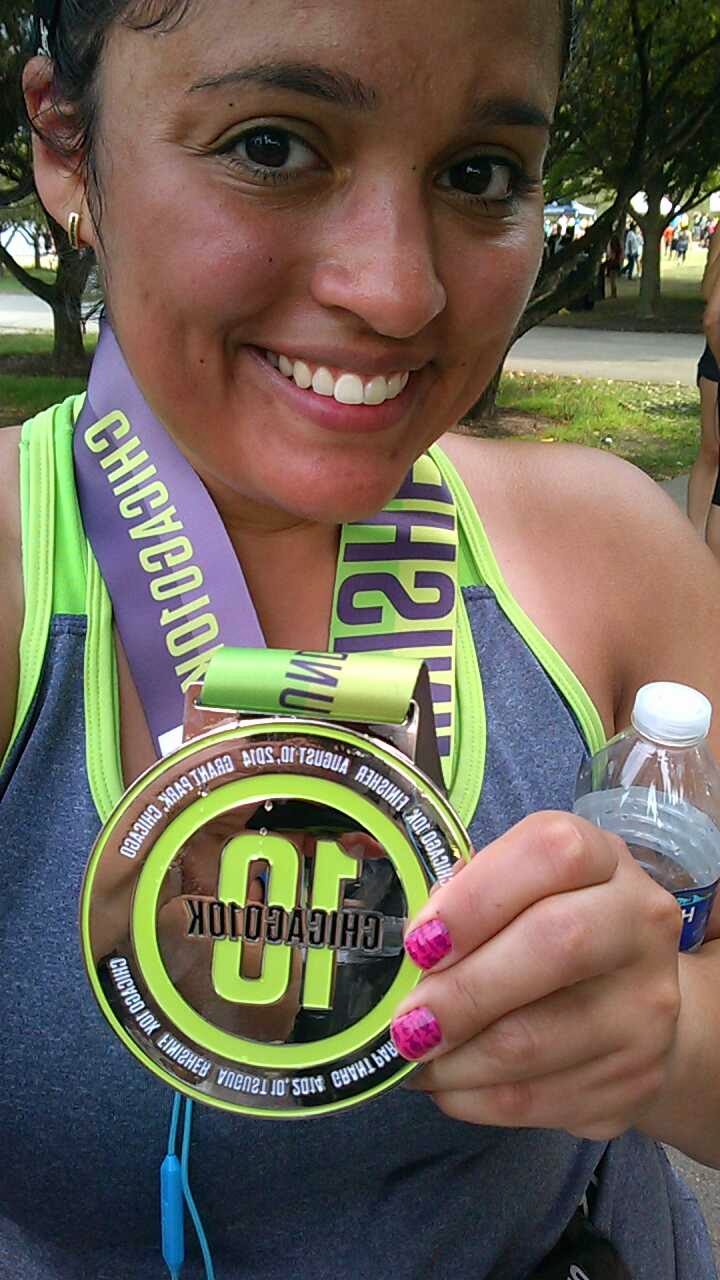 I reminisced about how I did on this same race last year and realized it wasn't much better.  I made the mistake of doing a sprint distance invitational triathlon the day before and it showed as I cried coming across the finish line of the 2013 Chicago 10k.  There was a guy there perhaps waiting for a friend who snarkily asked, "Oh, is this your first 10k?" as if I wasn't capable of a long distance run.  It took every ounce of energy I had left to push down the rage I felt building inside of me to simply reply "no, I'm just a bit worn out after doing a triathlon yesterday".  That shut him right up and I walked away with my head held high.  You don't know me sir, and you have no idea what I've gone through...please don't make assumptions about me or my abilities.  All things considered, while it wasn't a 10k PR for me, it was a course PR so I'll take it :)  Now off to drink some more water...