I'm slowly but surely moving from noob to snob in the beer world, but even as a novice I knew there was something special about Goose Island's Bourbon County Brand Stout. I remember the first time I tried it and kept thinking "wow, I didn't even know beer could taste like this". It was a few years back (before I really started drinking craft beer) and I was sitting at the bar just down the street from my office at the time. They sponsored our company softball team so I used to hang out there at least once a week. When I saw BCBS on the draft list it piqued my interest and I was totally blown away by the first sip. I should also mention that my tolerance was quite low and I was pretty buzzed by the time I left the bar that night. (Thanks CTA for always making my commute home possible when driving isn't an option!)

Now that I've delved a bit deeper into the wonderful world of craft beer I knew I had to try more of the BCBS, especially this years variants. The only problem was, I'm never in town for the release on Black Friday. I'm always with my family in Michigan during that time so I was super bummed I'd miss out on the chance to grab a few bottles. I tried to enlist my friends to the task of finding some, but none of them were too enthused about waiting in line for me. Thankfully a couple friends were able to find bottles out in the burbs at their local store so I was able to get some of the regular ones but the variants still eluded me.

In come Goose Island tap room. Recently Goose Island has opened a tap room in Fulton Market and it has already become one of my favorite watering holes. The atmosphere is super relaxed and you can bring in your own food! I saw they would have BCBS on tap so I stopped in with a coworker and enjoyed one of the earlier iterations of the beer. If you're hoping for a chance to try some, definitely check their weekly tap list to see when they'll have it on tap again.
After trying a few of the other BCBS variants at the tap room and learning more about this years proprietors I really wanted to finally try some. I kept checking the list at Goose Island but didn't see it on there. Luckily I'm friends with a bunch of beer nerds and one of them posted about a live screening for Grit & Grain the documentary about BCBS hosted by Good Beer Hunting. I noticed the flyer said we'd get to try the base for BCBS and that had me sold. The base isn't something you can typically find anywhere since they don't sell it and I'd never had the opportunity to try it before. I was delighted to find out the variant we'd get to try that night was (FINALLY) proprietors! The movie itself was really awesome. It told the story of BCBS in a way that took you on a journey from the loggers to the barrels and eventually the beer in my hand. It gave me a new appreciation for everything that goes into BCBS. 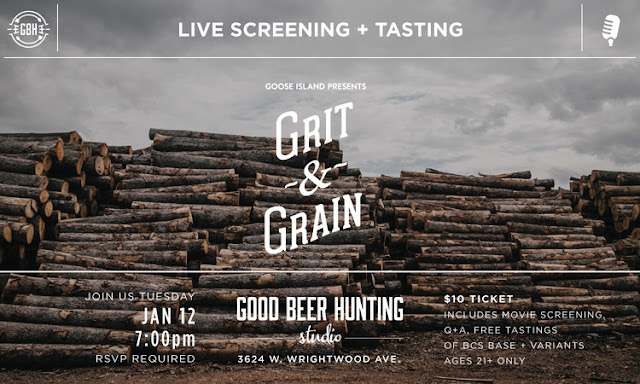 After the screening I chatted with one of the panelists for a bit and we nerded out over coffee, barrel aging, and a bunch of other beer related goodness. This was my first time really getting a first hand account of things so it was cool to get an insiders perspective. My curiosity was rewarded because after our chat he handed me a bag of the Intelligentsia coffee used in this years coffee variant. I'm pretty excited to see how it matches up to the bag of beans from Dark Matter that were aged in BCBS barrels.

As if all that weren't enough, on one of my visits to Flo & Santos Mark told me they'd be having a BCBS tap takeover so I immediately added that to my calendar. Let me tell you, it did not disappoint. The only problem was that when I showed up there were literally no open seats at the bar and the hostess didn't think any tables would be opening up soon. Most folks would get discouraged at this point or simply wait it out but I was hungry and so I set off to make friends with strangers. I saw a guy sitting by himself at a table with his computer out and took a chance that he was there alone. Turns out he was and let me share the table with him so I could order some of my favorite wings and a glass of the BCBS Coffee. This totally worked out for both of us since we ordered different variants and then just shared so we could try more things. After this trip I now have just one variant left to check off my list and that's the BCBS Rare. I'm hoping I can snag some eventually but even so, being able to try everything else has been amazing in itself.