The Power of Positive Energy


I’m a firm believer that when you put positive vibes out into the world they come back to you in spades.  For instance, try going a whole day without complaining.  Not even once.  Just take things in stride and see how different you feel by the time you lay down to go to sleep.  I know it’s a lot easier said than done, but it’s helped me to appreciate my days so much more and I have far less stress.  This goes the same for actively emitting good energy with everything you do.  After finishing my first half marathon I was so thankful for the experience that I had to thank all the people who helped me get there.  I sent an email to the woman from Xsport who gave me a free race registration code, the president of my company for encouraging employees to get healthy by sponsoring different races and a biggest loser competition; I even emailed New Balance to say thanks for making such great shoes.  It sounds silly, but the thought of potentially making someone smile with just a quick email made me happy.  I heard back from ALL of them.  The woman from Xsport wrote me a long heartfelt email that brought me to tears, the president of my company called me personally to congratulate me and New Balance offered me a spot as a product tester.  I wasn’t expecting ANY of that to happen, but there it was.

That same week I was telling my coworkers that I thought a good challenge for my next race would be a triathlon.  Literally that same day when we got back from lunch there was an email from our company asking if anyone wanted a free entry for the Chicago Lifetime Triathlon.  I threw my name into the pool on the off chance that I might get picked and a few hours later got a confirmation that I was chosen as one of the 3 athletes to represent Perl Mortgage on race day.  A small panic set in when I realized I had about a month to train for 3 individual sports, 2 of which I hadn’t done in years.  Some orders on amazon, a few early birthday gifts and a trip to the cycle shop later, I had a new bike, wet suit, tri suit, and pretty much all of the gear I would need.  Luckily I have some triathlete friends who gave me pointers and helped me train. 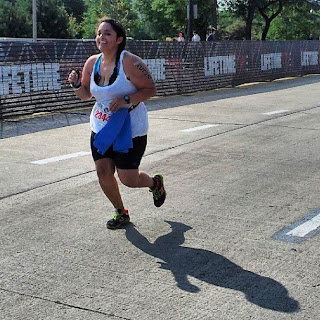 The energy on race day was unlike anything I had ever felt before.  I could barely eat that morning as my nerves really got the best of me.  Setting up transition with a flashlight before the sun came up was so surreal.  I did the best I could, mostly just tossing things together with a lick and prayer, hoping for a miracle.  A funny thing happened when I actually started the race, it was like the second I hit that freezing cold lake water it washed away everything and I was left with just the buoy ahead of me telling me where to go.  I survived the swim and headed back to transition to grab my bike for the next leg of the race.  This part is still a sore subject since it was so rough for me.  I really struggled with the part I thought would be the easiest for me.  It took me almost 30 minutes longer to complete the bike than I had done in training.  I had to keep reminding myself the important thing was to just finish.  Once I got to the run portion I was golden.  I was able to just relax and enjoy my favorite of the 3 sports.  My family and friends were there at the finish line to cheer me on to the grand finale of my triathlon debut.  As I sprinted across the finish line I was overflowing with happiness and couldn’t stop smiling.  So now that I’ve had a few days to recover, it’s time to start writing those thank you notes again and see where they take me this time!
Posted by Unknown at 12:36 PM