Do you like to run?  Then you're a runner.  It doesn't matter how fast or how slow you go, a 15 minute mile is just as far as a 4 minute mile.  If you like to run, you're a runner.  It's really simple.  You don't even have to run very far to be a runner.  Runners come in all varieties.  Lately I've had a lot of people tell me that they're too afraid to try a race because they don't think they can make it.  Here's the thing, running is probably one of the simplest things to do.  You don't need any equipment or training, it's a natural movement for your body.  We were meant to run.

Another reason people give me is that they're concerned about other runners judging them.  I've done about 20 races now and I haven't felt judged at any one of them.  The only thing I've felt is hopeful and encouraged.  At every single race that I have run, there has been a handful of people who take a second to say something uplifting.  Now that I have some more experience, I do the same for others.  "You're doing great, you're almost there, nice pace..."  These are all things I've heard along the course or said to other runners.  I've gotten high fives, smiles, and all sorts of positive reinforcement but never an ounce of negative energy.  There have been times when I've pushed people who are walking to just jog with me for a bit to keep them motivated which in turns helps to keep me going.  Granted, some of us are faster than others (I'm in that slower category myself), but running is all about YOU.  Every runner has a different journey to get them to that starting line on race day and there's no use comparing yourself to them.  The only competition you have out there is the voice inside your head that keeps telling you "I can't".  You can, and you will.  Once you learn to silence that voice of doubt your body will follow wherever the mind leads it.

I used to think I wasn't a runner or that I couldn't run.  I was wrong.  I prove to myself every day that I'm a runner and I was meant to do this.  I'm always at the back of the pack for races and that's just fine with me.  If the zombie apocalypse ever does come then we'll probably still be faster than the folks who don't want to leave the couch.  For you fast runners, if you do ever get the chance to, try slowing your pace and running a race at the back.  I can almost guarantee that it will change your perspective on things.  The people that I've met while running have brought me to tears, inspired me, and most of all changed me.  Listening to what brought them there to that race and continues to push them to run is awe inspiring.  There are cancer survivors, parents who run for the children they've lost too soon, and people who have overcome such adversity it's a miracle they even find the strength to get out of bed.  We all have the same outlook, it isn't about how fast you run, it's about making it to the finish line. 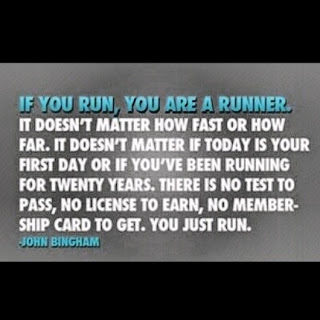