Becoming a triathlete has been one of my proudest moment as an athlete. Sure I won trophies or awards when I was younger but that was always about the team. Last year as I crossed that finished in line it was like the culmination of all my hard work put to the test. And I passed! After I finished I knew I'd be back for more and I wanted to share that passion with others. I'm not exactly sure when Sam and I first crossed paths, but as soon as mentioned her desire to one day do a triathlon my immediate response was "so why not next year?".

I'm guilty of this as I'm sure many of us all are, I'm my biggest obstacle. I imagine all these excuses disguised as reason as to why I can't do something and I let it hold me back. The same thing was happening with Sam. She would come up with an excuse and I would come up with a solution. She, along with her friend, signed up for the Super Sprint. The closer we got to the race the more I went into coaching mode to make sure she was ready. We went to the lake to swim together. We cross trained at the gym to increase strength and endurance. We had a similar race schedule so we ran together almost every weekend it seemed like. In the final week I knew she was ready. Everything she worked for came down to this moment. I felt so excited for her to experience the joy and pride of calling yourself a triathlete.
For her, race day was Saturday so I tagged along to cheer her on as she would do the same for me on Sunday. We got to Montrose with plenty of time for her to set up transition and get the nerves out. We ran into some of our Chicago Runners family and my friends I met during training the year before. Some were out there for the first time, others like Denise were out there to claim the triple challenge by completing all 3 races that weekend. I watched as Sam came running back from the water with a smile on her face, knowing she had the full confidence to kill this race. I cheered for her on the bike then waited for her at the finish line as she made her debut as a Triathlete.

Sunday morning was my turn. I woke up with that same nervous energy I get right before any big race. I had laid everything out the night before but I double checked to make sure I had everything. Once I was ready we were on our way. I knew it had rained the night before but I was not prepared for just how muddy it would be in transition. I slipped a few times as I tried to walk my bike up the hill and when I finally made it to my rack it was almost full. I was able to ferret out a small space near one of the flags and set up my transition area mostly on my bike to keep it all clean and dry.

I ran into Johnny's uncle and a few other ironman friends who helped calm my nerves a bit as I made my way back to where Sam was. The pros were set to start at 6am and that's where I wanted to be. We staked out a great spot on the lakefront just south of the swim start and cheered as we watched the best in the sport cruise by us. Denise, the one I mentioned earlier, she was in the wave right after the pros so I made sure to wave and wish her good luck before she got in the water. Her wife Claire had a later start time so she sat with us to cheer and take pictures. I was so anxious I couldn't sit still. This is where I begin yo have all those doubt's and wonder if I'll be able to do this race. Thankfully I saw some familiar faces from the Ebony Mermaids and they reassured me of my abilities. My start time was getting close and that meant I had to get my last hug from my friends before going into the starting chute alone.

This is moment, this is where I find greatness. I kept reminding myself THIS is what I trained. THIS is what keeps me going. I had almost forgotten that Iliana (the one who talked me into jumping up to the Olympic distance) would be in the same wave as me. As soon as I saw her it was like the fear melted away. I had a friend in the water and that was super comforting. I knew it wouldn't last long since she's much faster than me but just knowing I wasn't alone really helped me.   I'm so thankful to her for helping me when I was a total newb last year and for pushing me to do the longer distance.  She believed in me before I even realized what I was capable of.  (side note: those are not gang signs in the picture, it is our sorority hand sign for Sigma Lambda Gamma National Sorority Incorporated)

I felt great in the water. I was relaxed, comfortable and best of all, I was quicker than the year before. It was much choppier than I expected and the sea weed may have been plotting to drown me but I just kept putting one arm in front of the other. I passed quite a few people holding onto the wall and I remember thinking I hope they don't let this crush them. I hope they can push past it and then come back again next year to crush it. As soon as I hit those steps and got pulled out of the water I was on my way!

Transition was a mess so I just did my best to get in and out as soon as possible. The first 6 miles on the bike seemed to fly by. I thought to myself, hey I might actually enjoy this. Then fatigue set in. My muscles started to cramp and I cursed myself for not investing in a better bike. As much as I love my hybrid it just wasn't meant for this. On the plus side, my struggle must have been evident because nearly everyone who passed had something encouraging to say. When I finally hit Lower Wacker it was a Godsend. It was flat, smooth and shielded from the sun. I was able to pick up some speed and actually enjoy the ride for a bit. I saw someone in my wave ahead and charged ahead to pass her. It was the only thing that motivated me at the time. Somewhere near the turnaround I saw Jose and Rey who told me it wasn't much further and cheered me on. A little later I ran into Mauricio who slowed to see how I was doing and asked if I needed anything. I was struggling by now and just that simple act of kindness was enough to keep me going.

By the time I made it out of transition and onto the run course I was dead on my feet. Sam was there to let me know I wasn't going to die and snapped a few pictures. This is where my strength as a runner kicked in. I've had plenty of tired runs and I know how to push through them. I took walking breaks when I needed them but it was getting so hot out I knew I needed to finish soon. I saw the boys out on the course again and they each high fived me as we crossed paths. My friend Nicole was out rollerblading and kept me company for another chunk of the race. As I made my way around the aquarium I saw Denise on her final leg of the day and we stopped to hug. There's a hill just before the last turn leading to the finish line and Sam was there waiting. All of my muscles were screaming and I felt like at any minute I may burst into a little pile of dust but I just kept going. I hit that final straight away and gave it everything I had left, which wasn't much. When I finally crossed that finish line I wanted to collapse. I wanted to cry myself into a puddle of happiness.


I remembered Denise was still out there so I double backed to the hill and waited with Sam. As we saw Denise reach the base of the hill we erupted in cheers on both sides of the barricades (she had a lot of friends out there). We all started running with her along the sides of the fence all the way to the finish line. Being a part of that moment was breathtaking. She had just finished her third race in two days. 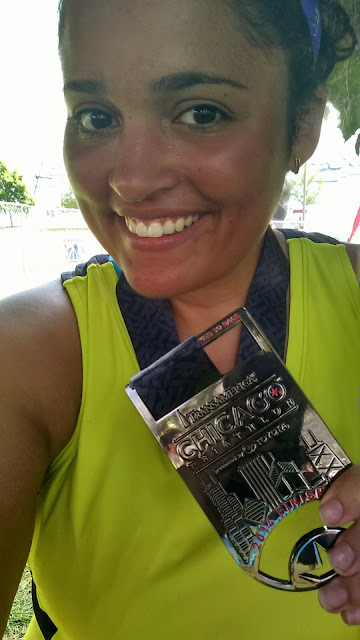 I'm still basking in the glory of that day. It helps that I have this fancy tan line of my number on my arm as a constant reminder of my accomplishment. I did it. I finished something I could never have even imagined was possible for me. Trust the journey and have faith that you have what it takes to get you as far as you can possibly go. Its not about the destination, enjoy the journey.
Posted by Unknown at 10:08 AM