Back in October after finishing my first marathon I told my friend Sam that whenever she decided to do her first marathon (because I knew the day would soon come) I would be there with her every step of the way. She was vehemently opposed to the idea at first but after we went down to Indiana to support #TeamMilton she changed her mind. There's something about watching a person who had transformed from couch to 5k to marathon in less than a year that really struck a chord with her. I was kind of hoping, perhaps just wishful thinking, that she would pick a fall marathon for her first but lo and behold she decided that Little Rock would be her #1 choice. As soon as she told me she had registered I knew what I had to do and got my credit card ready. Shortly thereafter, with a little nudging and encouragement we got Umber to sign up for her first half marathon.

Over the next few months following that decision we made plans and reservations for our trip. There would be food and parties and an all around good time escaping the bitter Chicago cold for a few days. I talked Eric into joining in on our hilly adventure to the south. Everything seemed to be going well until Sam started having pains and injuries that brought her training to a halt. She's my gym partner so we switched gears and focused on mostly strength training with some cardio mixed in. As March 1st approached I began to worry that we would be totally unprepared for this race. I knew we would finish, quitting was never an option, but I was seriously concerned that it would be an ugly battle for us both.

Sam, Umber and Erica (my roomies for the weekend) all flew down Friday morning. I enjoy road trips so Eric and I mapped out a course there and back leaving in the wee hours of the morn. On our way we made a quick stop for breakfast and as we got closer to Arkansas made a slight detour to Memphis. Good sweet lord baby Jesus was this a grand idea. We had a late lunch/early dinner at Charlie Vergo's Rendezvous and those ribs were everything I could have dreamed they would be. You can legit smell this place at least a block away and the entrance located in a side alley made me feel like we were exclusive guests at a secret dining club. Once our bellies were full we saddled back up in the car for the final few hours to Little Rock. Eric dropped me off and headed to his hotel for some rest while I got caught up with the ladies on what adventures they already had since arriving.

There was a grip of Chicago runners who had made the trip down to AK for the race and a local they had befriended the year before invited us all over for a welcome dinner. We socialized with runners from surrounding states and exchanged race stories. Per usual, Sam and I tried to convince anyone who would listen that they need to try out a Spartan Race. I believe we may have converted a few folks (fingers crossed). It's funny to see so many familiar faces of people you've never met but recognize through various running groups. I finally had a chance to meet the infamous See Nic Run and catch up on his recent travel adventures.

Saturday we took the shuttle over to the expo center - not realizing how close it was - to check out the vendors and grab our packets. The race shirts were a retina burning safety orange and I didn't find anything I was looking for to purchase. We ran into the rest of the Chicago crew we missed the night before and spent a good chunk of time getting a complimentary pre-race massage. All that excitement really worked up an appetite so we moseyed on over to the Flying Saucer for some lunch. Saturday night was a bit of a fiasco for the dinner situation but we made the most of it and spent it chatting with lovely divas of Women Run The World. We had to call it an early night to get ample rest for the big day.

Sunday morning I woke with the excitement of a kid on Christmas morning. I had carefully laid out my gear the night before and didn't take long to get ready. We had a few snacks and made our way to the starting line. It was a dreary 30-something with a light drizzle but we didn't let that dampen our mood. The music was playing and we danced our way to good spirits. Sam and I knew we'd be running a slow race so we opted for the early start allowing us more than enough time to finish the race. As soon as the guns went off we were on our way to Sam's initiation into the marathon class of 2015. The first few miles breezed by and we saw Nic as he was heading to start the half marathon. Around mile 3 we stumbled upon a pirate and stopped for our first race check in of the day. So far so good.

A few miles in we're still holding on strong and riding the downhills as they come. We chat about all sorts of random things and time seems to go by pretty quickly. A guy we met at the race expo mentioned that the worst hill would be right after we pass the school for the deaf and also the school for the blind. He was right. We saw the schools and prepared to conquer the beast. Our teammate Steve always tells us to charge the hills so we did our best to push through but ultimately the elevation won out and we had to walk for a bit. Soon we started winding through the woods on a road that gave way to a seriously steep downhill course. We had also decided that to help count off the miles we would dedicate each mile to different friends back home who couldn't make it to the race. This helped keep us focused but also gave us something to look forward to as we planned them all out.

When we hit mile 17 things got ugly. We came around the bend and saw a wave for mile 22 waving at us like a prank. Ashton is that you? Are we being punked? This began a long trek out to a turnaround point we couldn't see but we waved to our friends already on their way back. At this point Sam is becoming delusional and asking me if people on the other side heading back from the turnaround are friends of ours. They weren't. Like not even a little bit close to what our friends look like. This might not be good. I try to keep conversation going and do our best to keep our minds off the steady stream of drizzle/rain that keeps falling from the sky. After clearing the turnaround point we come to my favorite aid station of the day, warm chicken broth. I never knew I could love a cup of chicken broth so much but I swear to you it was like the elixir of life! It gave me the second wind I needed as we signed the wall and headed back onto the course. I had been carrying a giant pickle for Sam to help with cramps and she finally decided to eat it. This pickle gave her the life she needed to break through and keep going. 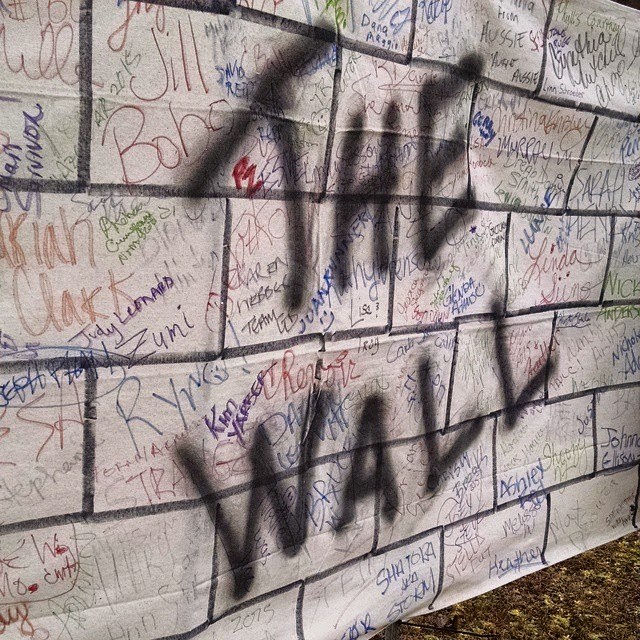 We hit mile 23 and we know it's smooth sailing from here, only about a 5k left. By now I can feel the multitude of blisters on my feet scorching in pain and throbbing. There is nothing I can do but to keep moving. I'm convinced that somehow the blisters are reproducing on their own and creating an entire colony of fluid filled pockets all over my feet. The pain is beginning to get unbearable. Not too much farther, I just need to keep going. I try to act as nonchalant as possible so that Sam doesn't realize just how uncomfortable I am. I'm biting my lip and fighting back the tears that plagued my first marathon. She's a few feet ahead of me and still looking strong. Umber finished the half and came over to meet us. She can tell I'm not at my best but we both know that the only thing that matters is getting Sam to that finish line. I suck it up and just keep trucking. When we finally reach the final stretch I breath a heavy sigh of relief and try to turn on the after burners. I cross the finish line shortly after Sam and we make our way to find Umber. We're drenched, cold, tired and starving. 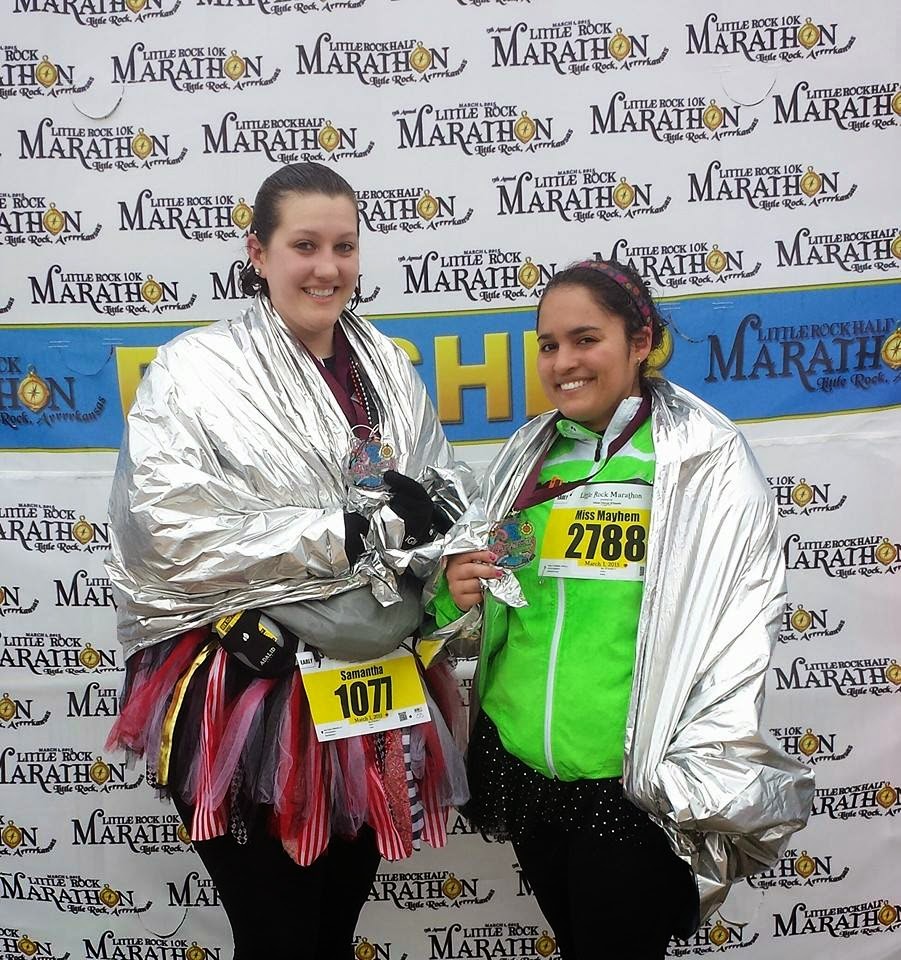 Along the course we had seen Eric as he passed us twice and I knew he had a great race. Judging by his placement between the pace groups I was guessing he had PR'ed. He did. By a lot. A 21 minute PR over his 2014 Chicago Marathon time. I may or may not have bragged quite a bit about his accomplishment. At this point our priority was food then a hot shower. I knew we had to warm up before our muscles got any stiffer. The rest of Sunday is a bit of a blur and we all landed on the struggle bus. Another bummer was the medal situation. The original finisher's medal (a la Flavor Flav) were caught up in customs due to the longshoremen strike and wouldn't make it in time for the race. To the RD's credit, they notified us ahead of time and even secured replacement medals so that we would still walk away with something on race day. Since then we've also received an email update letting us know the medals will be on their way in the mail by the end of the month.

Monday morning I was up bright and early so that Eric and I could start our trek back to Chicago. This time the plan was to stop in St. Louis at Pappy's Smokehouse. We had our fill of BBQ goodness then got back on the road so I could make it back in time for a work event. Sitting in a car for 10 hours the day after a marathon was not the best life choice I've ever made. Fortunately the pulled rib sandwich and sweet tea helped ease some of that pain. All in all it was a pretty great trip and once these blisters finally heal I might even consider returning to conquer those hills of Arkansas. Maybe.
Posted by Unknown at 11:11 PM