I've been feeling pretty bummed since my last tri so going into the Michigan Titanium Olympic distance tri all I wanted was to finish with a smile on my face. I didn't have any expectations for time or anything else, I needed to remind myself why I love this sport. There were quite a few of us Crushies heading to Grand Rapids for the race so I knew I'd see some familiar faces out on the course. Denise doing the full aquabike, Hannah and Meli doing the Half Iron, and then Claire and I doing the Oly.

﻿﻿ Things were a little dicey on the drive up to Grand Rapids (tornadoes aren't exactly the kind of weather you want to drive through). When we arrived at packet pickup the building was still on tornado warning and we had to wait outside until the warning was lifted. You can imagine the mass of people descending upon packet pickup once they finally opened it back up. Claire and I got our packets while the others sat in on the course talk. We saw friends we met at the Grand Rapids tri in June and chatted about weather conditions for the race. The year before the race had to be shut down due to unsafe weather conditions and we were hoping the worst of the storms were now behind us.

Of course our pre-race dinner was at a brewery, because, carbs. We all met up at Founder's Brewery and I ran into a friend of my brother's plus and old pal from my childhood. My heart was full and I was ready to take on the race. This would be my redemption. I could feel it. I would prove to myself that I was capable. ﻿﻿﻿﻿﻿﻿

﻿﻿ Race morning was a little different since Denise was starting so much earlier than us. Claire dropped her off and then came back so we could finish getting ready and head out. I didn't have my pre-race nerves, I felt calm and peaceful. We got to transition and chatted with the ladies around us. While we were standing by the water I felt something that had been gone for some time, excitement. As we eased into the water I knew today would be different. I wanted to cherish each and every moment. I had some troubles sighting but didn't let it get to me. I just kept moving at my own pace and when I finally emerged from the lake as one of the last swimmers I didn't sweat it one bit.

Usually when I get ready for my bike portion I feel a sinking feeling of dread. Mostly because I still have not been able to embrace this particular discipline yet. Today I just accepted it and found that calm place I had during the swim. The volunteers at bike mount complimented my shoe/bike combo and I set out with a smile on my face. Soon enough though the weather took a turn and started to rain. I cried for a bit. I'm not exactly sure why I had just a visceral reaction but I guess I was worried that the race would get cancelled and I wouldn't get the redemption I so badly needed. I pedaled harder, hoping I could outrun the rain. It finally passed and breathed a sigh of relief.

The hills on this course are beyond disrespectful. I felt like there was never a time that I was just coasting flat on a straightaway. This was especially frustrating because it made fueling close to impossible for me. I am not yet skilled at eating while trying to climb hills or fly on the downhills. I was starving though so I did my best to take in as much as I could. I have to say that during the race, more than any other, I felt an overwhelming amount of support and encouragement from fellow participants. Almost every person who passed me in either direction offered cheers and smiles. I so badly wished I could be them, seemingly effortless riding along the course, but there I was struggling every inch of the way. I never even looked at my garmin, just kept on pedaling until I saw the bike dismount.

Heading out for my run I was overcome with emotion. I was so close to silencing that doubt still lurking in the depths of my heart. The awesome thing about that looped course was that I got to see SOOOO many people. Almost all of them strangers, but that day they were my family. Urging me forward, giving me hope and happiness as I trotted along the course. I wasn't particularly fast and I didn't care. I didn't need a PR, I needed a finish. There were a few moments when I would get overwhelmed with emotion and start to cry, not out of sadness, but out of thankfulness that I had forced myself to keep going. I had the grit and resilience to push back the darkness.

When I finally entered the finisher's chute I felt almost as excited as my very first finish line. It felt like I was starting over. A fresh new beginning. Claire met me at the finish line with her 2nd place plaque and directed me towards the food while she went to get my official results. She came back with a smile on her face as she showed me that I had earned 2nd place Athena. I've never podiumed before, so to do so at the race following a DNF...well, you can imagine how emotional it was for me. While it wasn't a 70.3 finish, it was redemption for me. It reaffirmed that I was enough. I am strong and capable and fierce.

We hung out at the finish line to watch Hannah cross, earning first place Athena for the half iron. For those of you keeping score, we are now up to 3 CRUSH Multisport awards. So many hugs and tears all around. But our day wasn't over, we had more teammates to bring in. Denise finished strong and was so happy to see all of our awards. When Meli crossed the finish line she earned 3rd place Athena for the half iron. This race was redemption for her as her first half iron finish. The excitement was palpable. We decided to get cleaned up, eat, and then wanted to come back for the midnight finish. 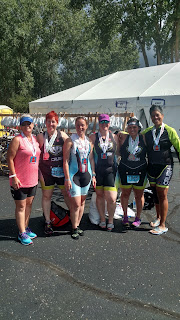 When we got back to the race site to watch the back of packers come in I kept feeling myself tear up. Hearing their stories and watching them come down the finish lines with their families was incredible. I wish I could bottle that emotion and keep it for rough days. We hear that there was one more competitor out on the course and they were worried he might not make the midnight cutoff. Hannah and I decided to try and find him on the course to cheer for him and bring him into the finish line. Even writing this I'm getting goosebumps all over again. People go out there and give everything they have for the chance to be called an ironman. Its incredible. I've never seen anything else like it. As he ran towards us we yelled and cheered as loud as we could. We gave him a time update and told him as long as he kept moving at that pace he would make the cut off then he took off. Being there for those last finishers was unlike anything I've ever experienced at a race and I urge all of you to do the same if you get the chance. There is something magical about the last hour of an ironman that can't be described. I'll have that glory myself some day and just the anticipation of that is enough to keep pushing me. 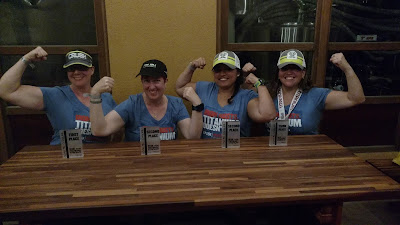 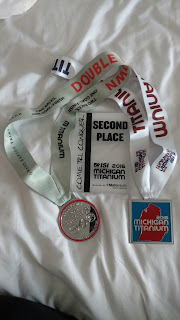