I'm a nerd. I love Star Wars. When I saw that Star Wars Celebration would be in California I started making plans immediately. It just so happens that there was a sale on flights and Sam asked if I wanted to take a trip to LA. Considering I already had the dates in mind we booked our trip and made arrangements to stay with my pledge daughter Melanie. And because I never pass up the opportunity to run in a new state I started scouring the interwebs for any interesting races during our trip. For months now Sam has been talking about how much she wants a guitar shaped medal. She really wanted to run the Mississippi Blues race but we couldn't make it happen this year. As soon as I saw the Sunset Strip Half Marathon had an electric guitar shaped medal I knew it was meant to be.

The only problem was that the only way to earn that medal shaped guitar was to run the half marathon and considering Sam and I would be running the Chi Town Half just a week prior I knew it would take some convincing.  I asked her if she preferred to do the 5k or half and she chose half. After thinking it over I decided to just take the leap and register both of us for the half marathon.

Our flight out to LA was mostly uneventful, aside from the kid behind me who kept kicking my seat. We grabbed our rental car and headed to Mel's place. The very next morning I had to be at the convention center bright and early for my first shift at SW Celebration. I've worked conventions and run a race in the same weekend before, but never a half marathon. I was concerned about whether or not I'd be able to keep a fast enough pace to avoid the dreaded sag wagon.

On the morning of the race Sam and I made our way to the Sunset Strip just as the sun was starting to rise. As we stood in line for bag check I ran into a kid I went to high school with. This was his first half marathon and I wished him luck before heading to the start line. We got off to a good start but as soon as we finished that first out and back then turned the heat was really starting to build. I'm so glad I decided to wear a tank top because we were definitely not prepared for how hot it got. We probably also weren't hydrated properly considering the weather situation.

And then the hills. Those disrespectful West Hollywood Hills. Good Lord. We weren't ready. Sam and I turned a corner to be confronted with a hellacious peak we had never before encountered. It felt like we were ascending Mt Everest. We basically complained the entire way up and kept telling anyone who would listen that we were from Chicago and clearly not prepared for this kind of elevation. The laughing helped distract us from the pain of climbing that hill.

Along the way we stumbled upon a new friend named Vince. He told us about his adventures running the LA Marathon and kept trying to recruit us to come back and join him in 2016. For a minute I was almost ready to register. But then I reminded myself that I just simply couldn't face those hills again. When we finally reached the downhill it was so steep that I could barely feel my legs as I flew down. I'm by no means a physics wiz but I was pretty sure that my forward motion was more than my body was ready for. I was relieved when we reached the bottom and I didn't fall.

A great part of this race was the history along the way. There were signs along the course indicated historically significant sites and what happened there. I've never been to that part of LA so it was really great to explore a new area, especially when the sites are already marked for you! 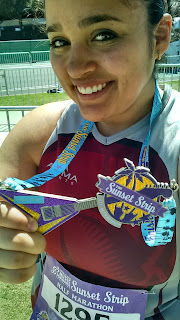 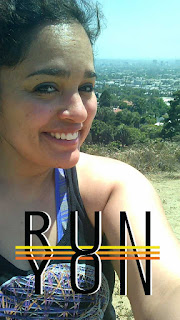 Sam and I had a great time laughing and telling stories with Vince until we finally reached the last stretch before the finish line. Sam had arranged for her Irun4 buddy Jamaica to meet her a block before the chute so they could cross the finish line together. They took off as soon as Jamaica saw her, but Vince and I weren't far behind. It was truly a photo finish moment all around.

Of course we couldn't leave LA without doing a little hiking as our active recover the day after the race. My legs felt surprisingly good but a few of those uphills were a little tough. Being up at the top of Runyon Canyon and just taking everything in was so peaceful. It reminded me that I need to get out and enjoy nature a little more. I haven't been spending enough time outside just appreciating it.

Aside from all the running, sightseeing and Star Wars, we also made some time to enjoy the local breweries. I've become a bit of a craft beer enthusiast so we took full advantage while we could. I've included a few glamour shots to induce jealousy ;) 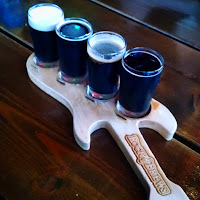 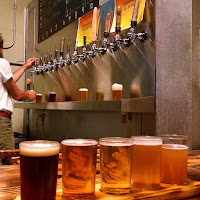 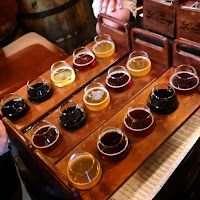