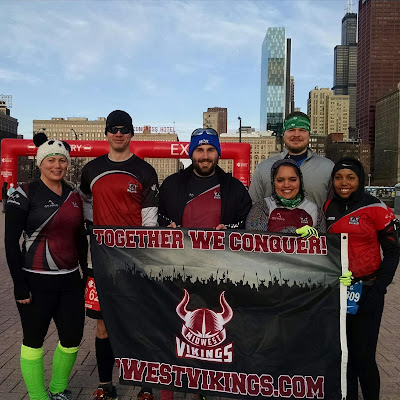 In Chicago where the winters are brutal, running outdoors becomes less and less appealing as the days get shorter and colder. I spent most of the worst days at the gym working on strength training or swimming and hit the streets as soon as the weather hit the 30's. 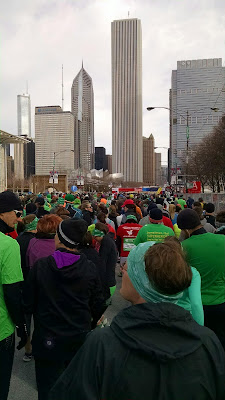 After the Little Rock Marathon all I was looking forward to was warmer temps and reuniting with running family. I couldn't wait to feel the pavement under my feet and the wind though my hair as winter begins to give way to spring. For most of us, we can't wait for the Shamrock Shuffle because we know that's the unofficial start of the outdoor running season.

Last year for the Shamrock Shuffle I ran some of my fastest miles. Going into the race this year I had no expectations, I just wanted to have fun. The swag was the best I've seen for this race so far and they even included a finishers medal. On race morning I met up with the rest of the Midwest Vikings as we tried to stay as warm as we could before heading to the starting line. In true Viking fashion we all started together but as we passed the starting line we each broke into our respective paces. Typically I run with Jenny or Sam but none of my usual pace buddies were there so I elected to try and keep pace with my teammate Tony. He's a much faster runner than me so I wasn't sure if I'd be able to do it but I figured it was at least worth the try.

We started off at a pretty good pace and by the end of the first mile I was still feeling good but could definitely tell that the faster pace was taking a bit of a toll on me. Because this is a distance I've done before I knew I could finish the entire race without any breaks. Tony usually runs at a quicker speed but takes breaks so running a little slower with me allowed him to keep running the entire time without stopping. While it wasn't a PR for him in terms of time it was the first race that he was able to keep running the entire time. We helped push each other and it got me a new PR even if only by a matter of seconds.

Sometimes it isn't how fast you go but what you learn along the way. 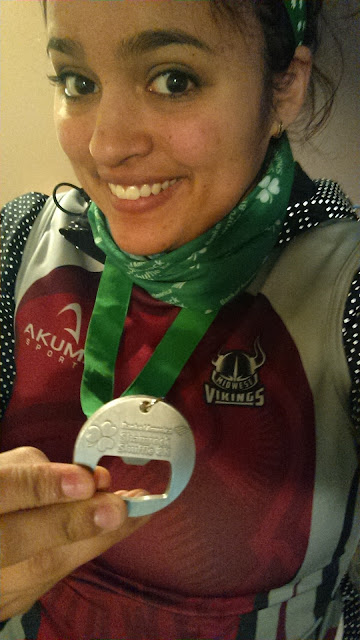